You have to love it when you find vintage items with actual history and provenance attached to them. Provenance is a "25¢ word" that refers to the object's history, such as who owned the object, where the object came from and when it came from. Provenance is to an antique or vintage item what a deed trail might be to a piece of land. In this case, you always own the item, but the "deed" makes it much valuable.

Provenance has importance because antique and vintage items are almost never completely unique. There are others out there, sometimes in better or more complete condition. So, a particular antique gun might be pretty common, but one that was used to shoot a president, where that can be proved, makes the item orders of magnitude more valuable.

People want to know if a certain piece was touched or owned by some great person. Their background or job might have had something to do with the object. A personal notebook from a great author and a prototype gun from a gun manufacturer or designer are two such examples.

In this case, we came across an amazing vintage / antique Marble's safety hatchet. The hatchet itself is a great piece. There is a cover for the sharp edge that keeps one from cutting a hand, finger or the sheath while taking the hatchet in and out of the sheath. When the edge is exposed, the cover folds back into the handle of the hatchet.

This is a great feature for a hatchet that might be used as a daily working hatchet.

Marble Arms & Manufacturing Company of Gladstone, Michigan began in 1892 with the invention and manufacture of the Marble Universal Rifle Sight by Webster L. Marble. Products expanded to include outdoor goods like a novel safety axe (this axe), hunting knives, match safes, compasses and the Marble Game Getter combination gun. Marble Arms remains an important member of the firearm and shooting sports industry. 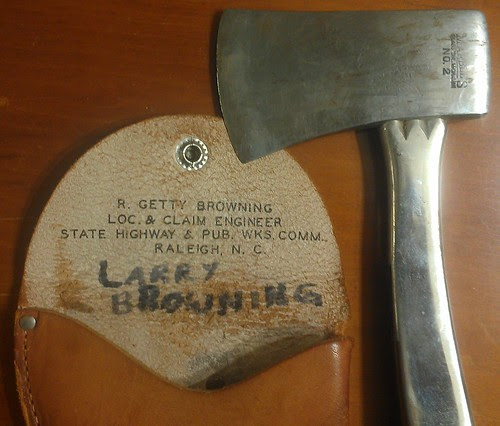 Provenance for this item comes from the owner of this axe. From the pictures you can see that this hatchet was issued to R. Getty Browning, who was chief location and claim engineer for the state of North Carolina in the 1920s.
There is wonderful age to the sheath. It was signed "Larry Browning" as can be seen in the pictures, but after research, that would appear to be his grandson Lawrence Browning who's father was his son Robert Cooper "Bob" Browning, Sr. It's wonderful that his own grandson was able to use this piece for a time.
Browning was instrumental in the creation of the North Carolina section of the Blue Ridge Parkway. He personally mapped, by walking, the entire 250 miles of the Blue Ridge Parkway in North Carolina and I imagine he may have well been carrying this very piece of equipment.


There's so much to tell about this man, but I'll stop here and give you a few links I've acquired in my research:
http://www.zoominfo.com/p/R.-Browning/1374800681 - A great write up on zoominfo.com
http://www.newspapers.com/newspage/18284912/ - His 1966 obituary.
http://docsouth.unc.edu/blueridgeparkway/content/6547/ - A photograph from 1952.
http://ncpressfoundation.org/wp-content/uploads/2013/06/RGettyBrowning.pdf - An amazingly well done press release about him.
http://www.amazon.com/Meshach-Browning/e/B001JS5I8Q - Link to a book about Meshach Browning, his great grandfather, who was a hunter in the 18th & 19th century and wrote down his experiences in this book. His grandson truly continued in the family tradition in his love of outdoors and we are all richer for it today.
http://toto.lib.unca.edu/web_exhibits/BRP_not_so_back_exhibit/06_people/06_people.htm- Another wonderful write up about his contributions.

The hatchet may still be for sale on eBay at the following link:

The W.C. Embury Company first introduced the No. 40 Traffic Gard lantern in 1940. They marketed it for use by highway workers, utility companies, and cities to mark road hazards for night time drivers. The lantern used d a proprietary Fresnel globe. The Dietz Company purchased Embury in 1953. Dietz continued production of the No. 40 Traffic Gard lantern until the 1960s. Earlier versions used 1/4" round felt wick, but the later versions used a 3/8" flat wick. After 1956, Dietz introduced the No. 855 plain globe for the Traffic Gard.

I started this post a while back and the item I had has already sold, but here are the original pictures on Flickr.

Links Around the Web